Surf ‘n’ Turf – the best of both worlds

Once again, I’ve fallen behind and owe an apology for slacking off with the blog. I do have a good reason though – planning and hosting a wedding where 90% of the guests were from out of province is a lot of work! I’ll hold off on any form of recap until we have the professional photos back from the lovely Lea of Marcucci Photography, but will share one of our sneak peak photos:

Once the wedding was behind us, we had the bandwidth to focus on something new. As you all know, we recently broke the mast on our beloved Alcidae. Along with the wedding planning, we have been researching costs to have a shop fix it, and let’s just say it isn’t pretty. We’ve decided that the responsible, adult thing to do is to not rush it back together and foot the added bill for someone else to do it but to source the parts and put it back together ourselves. This means we have time for another hobby.

A more grounded one. We began to shop for a small piece of land where we can build a tiny house and be predominantly off-grid.  Which was the plan before we got carried away with boat life. We decided that our first weekend alone in the city as a married couple was a perfect time to escape and explore some of what BC has to offer.

We decided to leave as soon as I was done work on Friday. We headed up towards Squamish and found a place to camp. We managed to find a perfect camp spot – other than the fact that the river was a bit strong and Lenny almost got swept away.

Although it had been a year since we had last been camping (on our journey across the country), we quickly fell back into our routine: I set up camp, Alex deals with the fire and cooking. In no time at all, I had my job done and was able to sit back and watch him struggle with the wet firewood (did I mention it had rained for the entire week?):

For some reason, he wasn’t overly excited about picture time

After the fire finally got going, we were able to have our first camping meal in a year – which obviously included marshmallows as both appetizer and dessert. Unfortunately for us, we foolishly assumed that the rain was done, so we didn’t bother to tarp the campsite before we went to bed. Of course, it rained that night. We were awakened early in the morning to Lenny standing in the middle of the tent shaking – he had reached his threshold for laying in water and was trying to dry off. It was only 5:00am, but we decided to pack up quickly and hit the road. We had a long drive ahead of us, since the first lot we wanted to see was all the way up in Prince George:

The drive up to Prince George is quite incredible: we went through mountains and desert, and ended up back in forest land.

Most of Saturday was rainy, but we still stopped for a few pictures along the way: 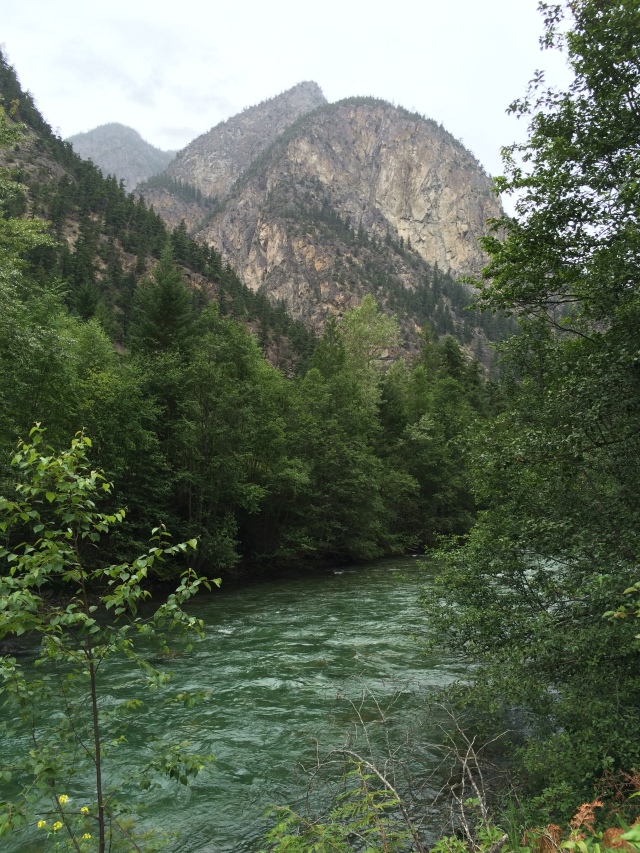 Along the way we found a little fruit stand that had a selection of local fruit. We had to get peaches (my favourite) and raspberries (Alex’s favourite), but we also couldn’t resist the blackberries. Not an ounce of exaggeration, there were some that were as big as my thumb! Not to mention that they may have been the best blackberries either of us have had:

We finally made it to Prince George, only to be a bit disappointed in the lot. At the same time, it would have been disappointing to find THE lot on the first try, and to miss out on the journey.

After leaving PG, we drove back to Quesnel, which was a couple hours back the way we had come. We saw another lot there on our way into town, which was much more along the lines of what we were looking for. It wasn’t enough to make us stop looking though, so after staying the night there, we continued on the next morning. I’ve tried to capture the day in another map, so study it well: 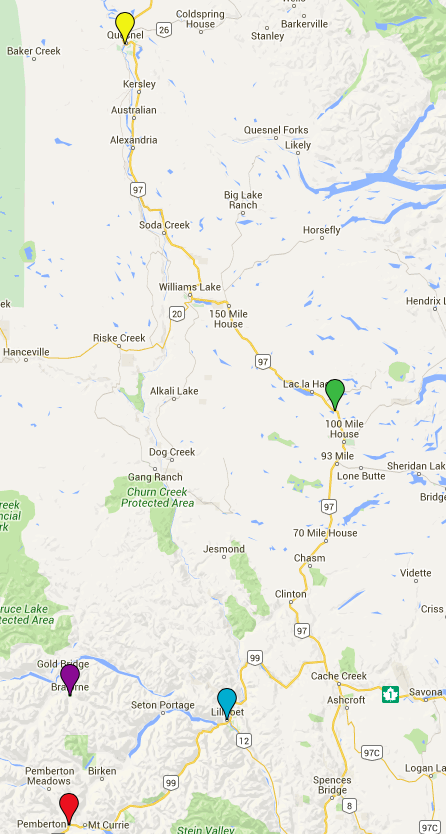 From Quesnel (the yellow point) we headed to 108 Mile Ranch (green), a small, unincorporated town. There was a cute spot there that I liked, although it was a bit too close to people for Alex’s liking (not completely ruled out though!). After that, it was back to Lillooet where we were hoping to have lunch at a local vineyard. Unfortunately, after the first person saying we could have Lenny beside the patio, we ultimately got turned away and had to grab a quick bite in the town.

From there it was on to Bralorne (purple). Now, this looks like a short drive in comparison to the rest, but it’s actually a couple of hours through a canyon and some mountains. The road wasn’t bad, but it also wasn’t exactly your typical highway: 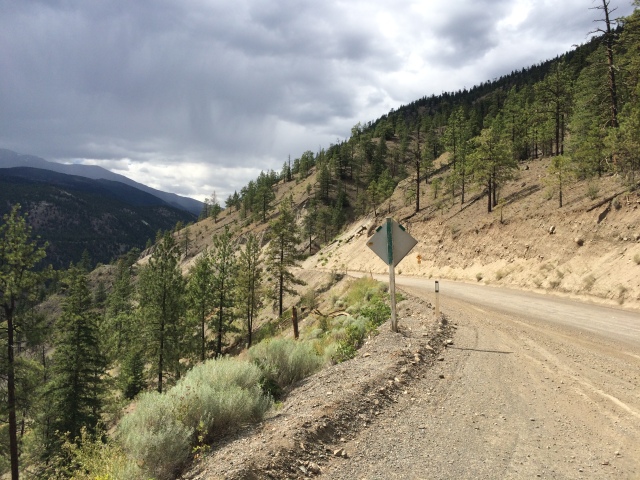 Along the way we went though thunderstorms and sunshine, from the top of the canyon to the bottom, and from 12C to 29C. At one point, we found a spot to stop where Lenny could run and Alex could jump in the water: 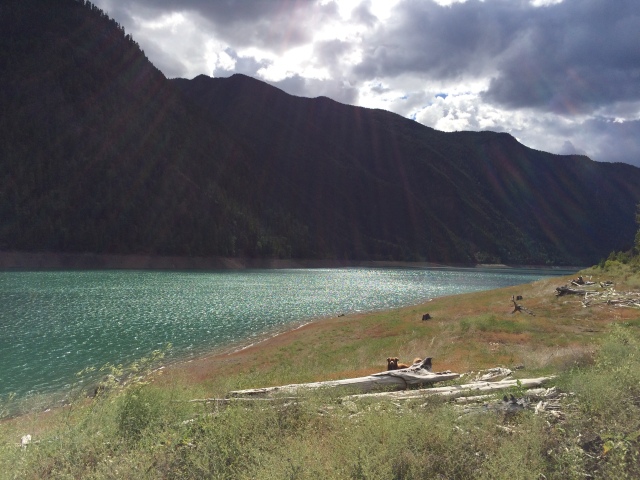 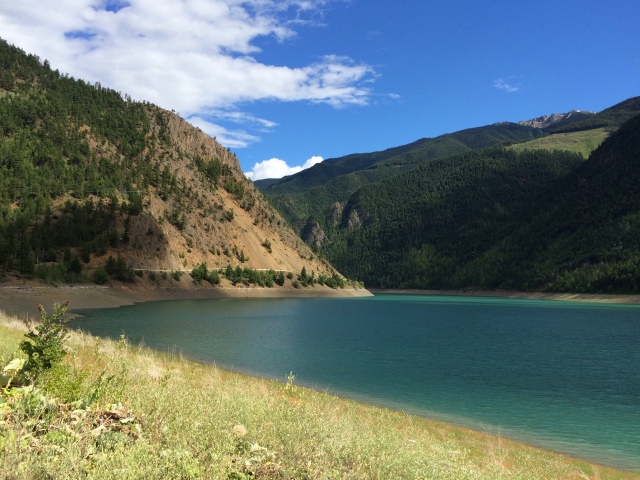 Same spot, opposite direction – quite the change in weather 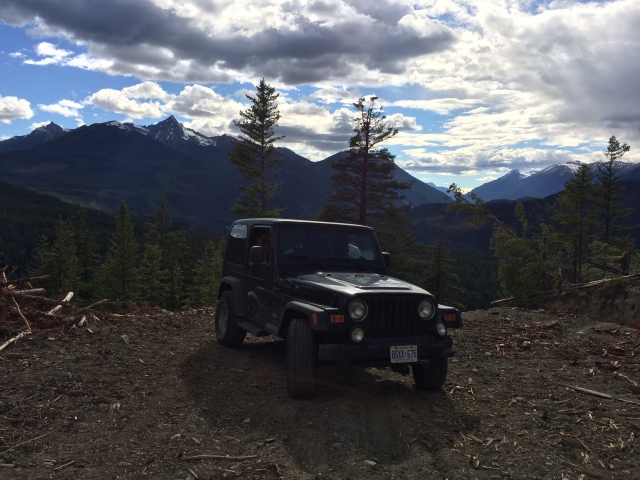 We finally made it to Bralorne. It’s this small town (population 77), a remnant from the gold rush. There were a couple of spots there that we wanted to see, and both of them would be perfect for us! The only problem? They were literally in the middle of nowhere. We wanted to be a bit remote, but two and a half hours to a store, or doctor, or anything – that’s a bit more than I can handle at this point, not to mention for when we start a family! We did take a moment to enjoy the view from one of the lots, which was on the side of the mountain peak:

Then we reluctantly herded the dog back to the car and headed to our last campsite in Pemberton. The road was another adventure of a drive: it was another couple hours on a Forest Service Road (only open May to October), with a mountain pass at 6000 feet. The changes were quite drastic, going from hot and muggy to having snow along the side of the road. And of course, the views were stunning: 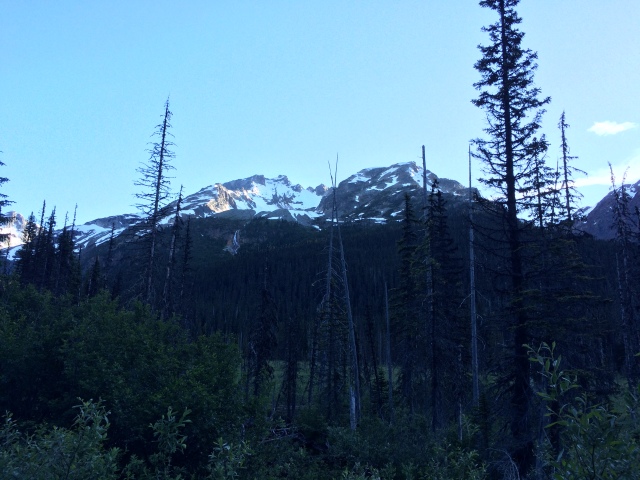 We finally made it to our destination spot in Pemberton (the red marker on the map). It was late, and there were other people at the same spot we were planning on camping. We decided to make the most of it (they did already have the fire going), and happily co-existed for the night. Besides being tired, we couldn’t resist the view: 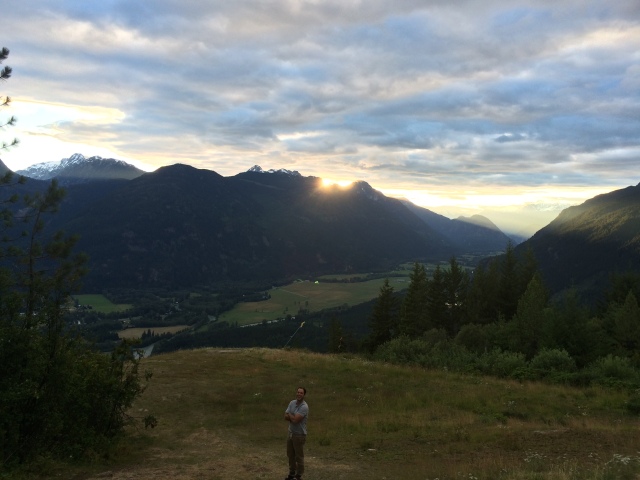 The next morning we headed back home to take stock of what we had seen. We had a few options for land, but more importantly had rediscovered our love of camping and had the opportunity to see some of the incredible diversity of the province we decided to make our home. We were also reminded of how lucky we are to be able to have the best of both worlds, land and sea, and to hopefully soon have a home on each.

Now, the weekend is practically here again, and we are already mapping out a new route to take, and new places to see…

This entry was posted in Uncategorized. Bookmark the permalink.